The Story of the Film Music about Osho’s Young Life

Slide guitarist Amano Manish on how he composed a winning score for a film based on Osho.  Worth a read. 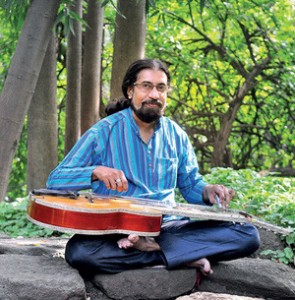 Amano Manish, the sannyasin  musician was recently conferred with the Alex North Award for Best Original Score at the Tenerife International Film Music Festival,  for his work on the film, Rebellious Flower, a biopic on the spiritual teacher, Osho Rajneesh.

There’s a story that includes Ravi Shankar that is perhaps as much as Manish’s favourite as it is anyone’s from the beatnik generation. It’s from the iconic Woodstock Festival in 1969. The sitar legend’s set coincided with American folk musician Tim Hardin’s performance. It was raining heavily when Ravi Shankar and the tabla great Alla Rakha stepped onto the stage. But the duo, in less than five minutes, showcased the essence of Indian classical music with the rendition of Manj Khamaj, an evening raga. “It was not Sawai there. Ravi Shankar had just minutes to perform at Woodstock. Yet, within that time, the audience was left spellbound,” says the 48-year-old composer, “That is the beauty of Maihar gharana as exemplified in Ravi Shankarji’s style. There is no room for melodramatic nonsense in the gharana.”

It is this training that helped Manish create a winning score for Rebellious Flower. The purpose of the film was to portray Osho from his childhood until he turned 21. . Osho, born Chandra Mohan Jain, was raised by his grandparents in rural Madhya Pradesh. So, the background score had to reflect the pastoral settings, where Osho’s life took shape.

Manish did not have an orchestra at his disposal or access to a state-of-the-art recording studio (Rebellious Flower was crowdfunded). So he chose musicians such as flautist Rohit Wankar from the city as part of the musical team. They did not disappoint. “I preferred Rohit for his raw style of playing the flute,” he says. While composing, the guitarist would watch rushes of the film and accordingly set music to the scenes. Jagdish Bharti, the writer and producer of Rebellious Flower, and Krishan Hooda, its director, deleted parts of the compositions they thought were not necessary. Throughout the process, Bharti kept reminding him to keep the cadence earthy and rooted. When the background score and the nine songs of the film were ready, they retained a raw, authentic sound. “The music was without any makeup,” adds Manish.

Bharti had given Manish a clear brief: “Keep the music simple.” Bharti’s suggestion to keep the score free of superfluous elements resonated with Manish’s musical grooming. “I was also asked to watch films by Satyajit Ray for which Ravi Shankarji had composed the music,” recollects Manish. The composer’s deeper association with Osho’s philosophy informed his music too. The music director had joined the Osho commune and lived at the ashram in the city for a couple of years in the late 1990s. This period was crucial to his musical evolution. During that time, he met and played with musicians such as Prem Joshua, a popular German sitar player. He also resumed his lessons in classical music with Shekhar Borkar, the Pune-based sarod master, in 1999.

Borkar, who is also from the Maihar gharana, advised Manish to tune his instrument like the sarod. Hesitant at first, he tuned the strings of his slide guitar as per his teacher’s suggestion. “I could suddenly play full chords with the tuning,” he says, “And I could swing from playing Indian classical to Western music in a flash.” Maihar gharana musicians are encouraged to experiment. “Baba Allauddin Khan was renowned for modifying the dhrupad to suit stringed instruments.”

To further his learning, Manish listens to Carnatic music. “I observe the styles of Carnatic violinists and internalise their approach to music to express their musicality in my technique,” he says. Playing the vilambit (slow paced compositions in Hindustani classical music) in his own way is another goal.

Unlike most classical music people who begin training early, Manish’s musical education began when he was 16. Sarod player Basant Kabra and slide guitarist Brij Bhushan Kabra, both exponents of Maihar gharana, accepted him as their student in Jodhpur. The city in Rajasthan, with its isolated forts and palaces, provided Manish with the ideal environment to pursue music. He spent five years learning from the masters until he moved to Pune. “There was no scope for me as a musician in Jodhpur.” Manish, who had been reading about Pune and Osho, was attracted to the progressive nature of the city and Osho’s teachings, which eventually led him to the project that won the prestigious international award.

The Tenerife International Film Music Festival (Fimucite) was established a decade ago to exclusively recognise excellence in film music. Fimucite takes place annually in Santa Cruz in the Canary Islands. This year, the jury was led by composer Richard Bellis, an Emmy Award winner. Manish was pitted against music composers like Stefano Lentini, who had composed music for the 2013 martial arts film, The Grandmaster, which was nominated for an Academy Award, in two categories. In total, 1,261 films were submitted, out of which Rebellious Flower most impressed Bellis and other members of the jury. “In a story regarding the pursuit of spiritual enlightenment, Amano Manish uses a traditional musical palette, but with the skill of a first-rate film composer,” praises Bellis.

Since its release last year, Rebellious Flower has been viewed over a million times on online platforms, says Bharti, but he has not been able to recover the production costs. Through his future project though, which will be a web series on Osho, Bharti plans to monetise the production and break even. Manish has been asked to reprise his role as music director for the next take on Osho’s life.

(firt published in the Pune Mirror)