Someone Wearing a Mala….

The other day I was  coming out from the head post office near the mail railway station (Freiburg) and suddenly my eyes caught hold of a bearded western man,  who was wearing some kind of mala and who was sitting alone outside of a coffee shop.

So out of curiosity I walked towards my next destination in a way  that I got a closer look at the man and his mala.
What I saw was like seeing a falling star. With exclamation, I shouted excitedly, ” Hey, you are wearing Osho Mala?”
The man looked at me, stood up and said, ” Are you a Sannyasin?”

Once I said, Yes, there was a hug, a melting hug, the same very energy one is used with sannyas hugs as if you are entering into each other, there is some transparent openness as if months of dynamic and kundalini has created a window in the wall. 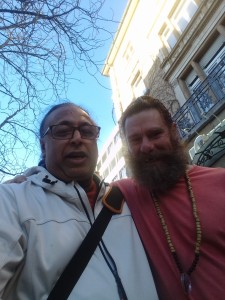 He also felt amazed at the wonder of meeting another sannyasin and that too just arriving in the city from Ireland a few minutes ago,  on his way to a farm house in France where a few seekers are living as a community.

I was in a hurry also to be at my part time work so I asked him for a quick selfie with the thought, I will write at sannyasnews about this incident,  how wonderful was the original idea of Osho. (Mala)
We exchanged the mobile numbers and names. Pramendra was suppose to be picked up by someone so there was no chance that we meet again.
I was simply surprised and was walking with the feeling, ” MY God, first time during last 15 years i have met someone in Germany with Osho Mala.”
It was reminding me that lost era of innocence in Osho Hugs and a common base where strangers from different parts of earth could see the one humanity.

Around an hour later, I got the SMS from him that he will be picked up next day, so has the time to meet up if I feel like.

I wrote him back, i have one and half hour extra time, we can meet,  have a coffee and meditate in the silence of the churches.

As I came to know, Parmendra took sannyas 6 years ago in Miasto. His elder brother was already a sannyasin. When he told him his wish to go to Pune, brother said, ” Pune has not that energy anymore, better you go to Miasto.”
Four months in Miasto become his turning point.
While talking and listening, I was observing too, how alive and present he is, as if is really struck by some higher calling.

I was sharing my stories about Pune, its spring and autumn and how bad (in my view) the policy of the management at root level have made the branches go dry, otherwise, Freiberg was once a very happening Sannyas city.
When I asked, ” Have you ever seen someone wearing Mala in England or Ireland?
His answer was No, but he said it  does not matter to him at all.
While describing  in my eyes the dried up sannyas scene , I also mentioned that a few ex. sannyasins are living together under the leadership of an Indian in Freiberg.  As he was curios to meet them, I gave him their address.

Next day, came the message, Met a Ex. Sannyasin at UMA. No love and light only pain and darkness. Thank you X

This entry was posted in Discussion, The World. Bookmark the permalink.

43 Responses to Someone Wearing a Mala….