Was born in Manila in 1947 as Diane Ivonne Onang, and grew up in California. She became a registered nurse in California in 1976 and trained at the LA County Hospital. In the years following her certification, Puja claims to have worked in clinics around Asia including the Philippines and Indonesia from 1977-1979, but in other interviews she claims to have been the director of Kern Country Medical Centre for several years during the same period. Whatever the case, she was in India in 1979 where she came into contact with sannyasins and the Pune one ashram.  After becoming a sannyasin,  astonishingly quick,  she became Director of the Rajneesh Health Centre in 1980,  until she fled with Sheela from Rajneeshpuram in September, 1985.

Puja was one of the inner circle around Sheela on the Ranch between 1982 to 1985.   Arguably she held a great deal of power,  including full control over all medical facilities.   Puja was feared and disliked by many in Rajneeshpuram, who later described her as a tyrant and compared her to Nazi concentration camp doctor, Josef Mengele.   Her one close contact was Sheela. For some reason this close contact between the two women has been lost in relevant biographies, and histories of the Ranch, but it is very important in any seasoned analysis.

One sannyasin recalled that Puja “delighted in death, poisons, and the idea of carrying out various plots.”
Puja was able to legally order the bacteria and equipment she needed to poison the 10 restaurants in  the town of the Dalles,  as legitimate medical supplies for the clinic/laboratory she managed on the Ranch. 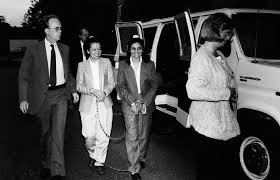 In addition to the salmonella used in the plot against the ten restaurants in the Dalles, Puja acquired a number of other more serious agents including Fransicella tularensis which could have caused a significant death toll if disseminated. These agents, and other equipment like a lyophilizer, were not necessary for RMC’s work as a diagnostic laboratory, but could, it is argued,  have had possible biological weapons use.

Sheela and Puja were arrested in West Germany on October 28, 1985.  They were extradited to the United States, reaching Portland on February 6, 1986. They were charged with attempting to murder Amrito,  Osho’s personal physician, first-degree assault for poisoning Judge William Hulse, second-degree assault for poisoning The Dalles Commissioner Raymond Matthews, and product tampering for the poisonings in The Dalles, as well as wiretapping and immigration offenses.

On July 22, 1986, both women entered Alford pleas for the salmonella poisoning and the other charges, and received sentences ranging from three to twenty years, to be served concurrently.  Both Sheela and Puja were released on parole early for good behaviour, after serving twenty-nine months of their sentences in a minimum-security federal prison.

It has been argued by some commentators that Sheela was always under the direction of Osho. We would say it is self-evident that she was actually under the control and influence of Puja.

Any SN reader know of Puja’s whereabouts now,  or what she is up to if still alive?

84 Responses to The Ranch’s Medical Director