SN had some enquiries about Osho’s Alford Plea in1985 to immigration offences:

This was his own description:

“The US government blackmailed my attorneys. Ordinarily it never happens that the government takes the initiative in negotiating, but just before my trial they called my attorneys for negotiations and hinted in many ways… they made it clear that “We don’t have any evidence, any proof: we know it and you know it – that if you go ahead with the case you will win. But we have to make it clear that the government will not like to be defeated  by a single individual: we will not allow an individual to win the case.  And the case can be prolonged for 20 years, and Osho will remain in jail.(all that time).   And there is always a risk (in such circumstances) to Osho’s life – that you should understand clearly.

Niren (Osho’s sannyasin lawyer) was crying when the attorneys came out of the meeting. 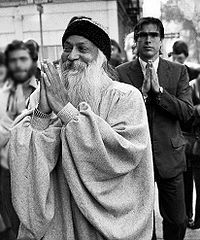 Niren with Osho before Court Appearance

He said, “We can’t do anything, we are helpless, we feel ashamed to ask you to say you are guilty. You are not guilty and we are asking you to say you are, because from what the government is saying they are making it clear that your life will be at risk if you plead “not guilty”.

THE LAWYERS TOLD ME THAT IF I ACCEPTED TWO MINOR CRIMES I WOULD BE RELEASED AND JUST DEPORTED.

I was ready to remain, to die in jail – there was no problem – but when they started saying “Think about your people” then I thought that this saying I was guilty or not,  was not a point to take so seriously.”

(Osho was initially accused of 34 immigration offences, but only two were proffered in the end for the Alford plea. )

He was asked to plead guilty to one,  that he had arranged for a foreigner to marry an American citizen, and secondly, that he had arrived in America with ‘intent” to stay, and not just as a long-term visitor.

It is interesting to hear Osho’s response when the officiating Judge , Judge Levy,  asked Osho “Do you plead guilty or not” – Osho simply answered “I am” !  This happened twice, until Osho’s lawyer intervened and added guilty!