The last country Osho visited (and ever visited outside of India),  was Portugal. He had previously been deported or refused entry to 21 countries in 1986… . .  Something which SN considers is often forgotten.

He never gave a single talk in Portugal, he is reported to have said the country was inimical to meditation. (recorded in Shunyo’s book).  He sat for some days simply looking out over a pine forest. Eventually cloud cover came to the house he was living in, and it disagreed with his asthma. He then never then left his room.

This proved to be the end of the  “World Tour” Osho had undertaken earlier in 1986.   He was eventually also asked to leave by the Portuguese government. It was the last straw in a long saga that had been unfolding since the end of Rajneeshpuram, the Oregon Commune, in the Autumn of 1985.

At that time Ma Yoga Neelam was traveling separately in Europe.  Osho asked that she be called to Portugal immediately. He had decided to go back to India and she would accompany him. The rest of Osho’s entourage would have to use their wits and follow on when, and however, they could manage. As it happened nearly all of them reached Mumbai within a month or so of him, but those were uncertain times. For all disciples, in or out of the entourage! 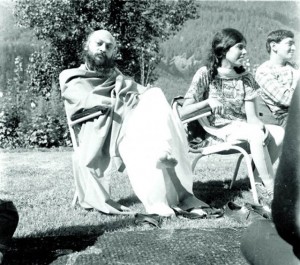 Neelam with Osho in early life

SN raises the question of why there has been  negative comment about Neelam in the past years. After all she alone was called by Osho to be his single companion of return to India.  One might at least hesitate taking into account Osho’s obvious high regard for her.

Briefly Ma Yoga Neelam met Osho for the first time in 1969 during Osho’s visit to Ludhiana after which her inner journey and love affair with Osho and his work blossomed. In 1972, Osho initiated her into sannyas after which she regularly visited the Pune Ashram until 1981. When Osho left for the USA, she stayed in his commune for three years from 1982 to 1985 in Rajneeshpuram, Oregon.

She came with Osho to Mumbai  in Nov 1985,  and was then appointed by Him as his personal secretary for India. When Osho  finally came back to Pune, Ma Neelam continued to work as His secretary, taking care of His work in India. Osho appointed her as a member of the Inner Circle and when He left his body in 1990, she continued staying in the commune in Pune until 1999, doing the work given to her by Osho.

From 1996-1999, each year she went to eight different countries of Europe to lead meditation events.  In 1999 she left the Pune commune.  Since then she has been conducting meditation camps all over India . She now lives in the settlement of  Osho Nisarga, Dharamsala, in the Himalayas.