The story is worth absorbing into one’s being.

A great Sufi mystic, Jalaluddin Rumi, used to live with his one hundred disciples in a monastery. Few travellers came. The monastery was far away from any town, far away even from any roads, but people became interested – curious people can go anywhere: they go to the moon. Curious people are curious people, they can go anywhere. They became curious and they went there. It was far away from towns, off the road, but they took all the troubles of the journey and they reached the desert. The doors were not closed – because Rumi had never thought that anybody would come so far away – so they could watch what was happening inside… 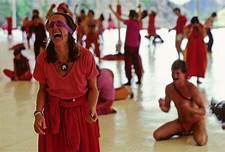 So they thought, ’What is going on? Have these people gone mad? What are these lunatics doing here? And what is this man doing? He is simply sitting, with closed eyes. He should stop these people – it is dangerous; they may go beyond the limit.’ And somebody was raving like a maniac, and somebody was hitting the wall, and everything was going on.

They became very afraid. They became so afraid that they went away. But after one year curiosity took possession of them again and they thought ’We should go and see what is happening now. Things must have gone worse. Either they must have killed that Jalaluddin Rumi by now, because he was just sitting in the middle of it, or they must have committed suicide… murders must have happened!’ So they went again. They could not believe it: they were all sitting silently.

Only Jalaluddin Rumi was dancing.

But this was a worse situation because they thought at least he had been sane, now he also was insane. But they took pity on the man. They thought, ’It is natural – just to be amidst these mad people for so long, he must have gone out of his mind.’ They went away.

But after one year curiosity again took possession of them and they thought, ’We must go and see what is happening now.’

So they went there. There was nobody, only Jalaluddin Rumi was sitting alone – the whole group had disappeared. Now it was too much. What happened? They became too curious.

They went to Jalaluddin Rumi and they said, ’We want to ask what happened? Where are those nuts? What happened to them? And what are you doing sitting here alone?’

’So what has happened then? Things have completely changed.’ They thought, ’It seems this man has taken the madness of all, so that they have become silent and he is dancing.’

And Jalaluddin Rumi said, ’The work is done. Now they have gone into the wider world to find other nuts – to help them. The work is complete.’

Then they asked ’Why were you dancing last year when we came?’

He said, ’I was dancing because I was so happy that my disciples had achieved. It was dangerous, it was very arduous to release their madnesses, accumulated down the centuries, but they were really capable people. I was happy, that’s why I was dancing. Now they have gone to find other mad people. Now they will make a hundred monasteries all around the earth.’

Quote by Osho from Tao: The Pathless Path – Talks on extracts from ‘The Book of Lieh Tzu’,

Jalal ad-Din Muhammad Rumi (1207 – 1273 CE), aka Jalaluddin Rumi, and Mawlānā, which means Our Master, is one of the Sufi world’s greatest poets and best known simply as Rumi.  His followers began a school of mysticism to encourage and celebrate his teachings – the Sufi branch known as the ‘Whirling Dervishes’ – the Mevlevi order.

This entry was posted in Discussion, Osho. Bookmark the permalink.