How I learned to Dance/ Shantam

“Nothing is said, nothing is heard, and the heart start dancing with the Master”
(This little piece I wrote in remembrance of the Osho Musicians, Late Swami Om Prakash Saraswati (Osho Rajyoga, New Delhi)   and Swami Satya Krishan (Bajaj Sahib, Karnal)

It must be a few weeks ago, during  my stretching exercises at the end of  my fitness session,  in the studio where I attend regularly.  An  Osho song started coming to me through the ear plugs and my stretching took the shape of slow dance movements, my hands were towards the sky, memories of  music groups in Buddha Hall, Pune became alive and eyes were filled with tears. That very corner in Rüeckgrat fitness studio became my Buddhafield!

Later on while relaxing in the wellness area after my Sauna, I felt compelled by some force outside me to write about how I learned to dance.

There are many personality traits in me which do not fit with the archetype Punjabi culture that I was born and brought up into. Punjabis are supposed to be extroverts and hard working, which surely I am not. Punjabis are very much into singing and dancing, i had no interest.  Punjabis reading books?  in India, i have never seen houses with books and my mother used to say, ” Why don´t you resell your books?”
In India, my race has made “Big Fat Punjabi Weddings” a way of life.
I am like an elephant,  I have simply walked my walk and felt an indifference towards the show off culture into which I was born.

Because Indians live a tribal life, before going to Pune, it was normal for me to participate in  5 to 7 marriages per year. When we were invited by the girls side, it was easier for me, as participating from the bridegroom’s side,  males were suppose to dance in the streets.
I had simply a No in my heart. Under much persuasion from fellow relatives, i have tried for a minute or  two to dance as per the ritual,  but I knew, it is not in me.
Later on, I found out, most of the dancers in a conventional marriage get drunk before the processions start.
Wine and liquor shops make brisk business during marriage seasons.
Yes, In India, marriages happen during a certain period of the year when the stellar constellation of Jupiter  and Venus are in a good position. In a city like Delhi, there are a few thousand marriages in particular days of the year. But I remained resistant to dance.

But then came Osho into my life. By chance, I came across a book on that fateful day of 14th October 1983 and amazingly, it was at the marriage of some relative. At the house of my uncle, I was searching for some magazine or newspaper to avoid boredom and saw one Hindi title of Bhagwan Shree Rajneesh lying on the radio.

Osho´s words created the click within the first page,  and during the next 36 hours I was drinking that book and once I gave the book back to its owner, my waiting was for the next day to go and buy books of Osho.
I was fully engrossed in the books,  and then around two months later there was a small ad in the newspaper about a one day Osho meditation camp in Delhi.
To take it as the sign of the next door opening, I found myself going to Delhi.  It was my first experience of an Osho gathering. After Lunch, there was also Kirtan. All others were dancing and singing but I was standing by the side to observe. A very fatherly and warm looking Swami Om Parkash saw my hesitation,  so at the end of the kirtan, he nodded at me for some communication.
I told him how I came to know about Osho books and through the newspaper ad.I have come here,  and then I said simply, ” I don´t feel very impressed by these dancing people. It feels like automatic behavior,  as in marriages.”
Swami Ji said, ” I see in you much potential to be with Osho. In the beginning, you need to do a little effort to bring the dance and meditation out, later on it happens on its own. Now, next is Kundalini Meditation. You give that a try.”

It was enough!  After that I have never met again Swami Om Parkash ji. Once in Pune I have seen him coming out from the main office. Yet that small meeting has left a mark of gratitude in my heart. How much a small encouragement can kick start a long and unending journey!

There was much contentment in me on the way back home. It was a long three and half hours bus journey. Next day, my body was aching from my first kundalini.
A few days later, i connected with the organiser of the meditation centre in my home town. He asked me to come next morning at 6 for Dynamic.
As I was not  any more new to Osho Meditations, there was no hesitation at all. I am really indebted with gratitude to Swami Satya Krishnan, who used to come everyday for months so that I could complete six months Dynamic without a break. Sometime there were others too,  but mostly I was alone.
To feel and see me dancing was really a sweet feeling. I was applauding my inner voice, ” This is what you were looking for. ” 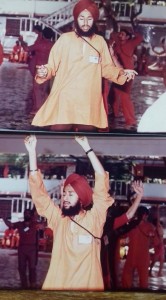 Three years of meditation in the local centre,  and at home,  was one of my most intense phases. I was part of a small sannyas community  and was doing two or three meditations everyday.
It was the first time in my life, I was not gloomy or lost.  I had a purpose and menaing in my life. I was not hankering any more to find a suitable political party to join.
From that time, 30 years of an eventful life has flown by like so many dry papers in the wind.
For me this is enough,  my body and heart now move to dance as second nature.

91 Responses to How I learned to Dance/ Shantam