Every Friday, my mailbox gets one circular mail about spiritual activities in Freiburg. Most of the time I delete it without even opening. I know what is happening: every week, two or three events are of Bhajan Singing, three or four  workshops about Man/ Woman healing, Tantra, Reiki etc. Someone is coming for Satsang and workshops, two or three events about Non-Osho Meditations and dance classes. Also there are ads about renting the rooms or rooms for healing,  counselling etc.

One sannyas lady, Taruno, is doing this professional work. Every advertisement per week costs 10 euros. I think around 1500-2000 people subscribe to this weekly mail. When I open this mail it is mainly to feel the semi-spiritual happening scene in Freiburg and also with curiosity, whether something related with Osho activities mushroom again or not.

The circular mail arriving at  the beginning of this month  was different. Subject was Osho Birthday Satsang.

Naturally, I opened this with childlike curiosity.  When was the last time that I have read about some Osho activity?

It was mentioned that on the evening of the 10th there will be an Osho Satsang for an hour starting at 6.30 pm and later on some music for dance. Also snacks and drinks will be available. Please inform in advance for practical purposes.

I wrote Taruno about my joining the event and also that I would bring some spicy food to share. 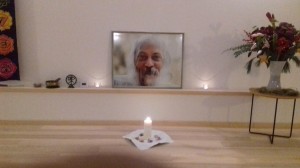 After years of sabbatical  from my astrology work I have again printed the flyers and was thinking to connect with Taruno for my ad. So it was a good opportunity to connect.  A few days later there was another circular mail to inform that the organisers were overwhelmed by the response. They were expecting 30-35 people but 70 people had registered – so it is requested few of us bring our own meditation cushions!

For this event, one yoga studio was rented out. It surprises me all the time to see how many Yoga Studios exist in this city. In a way, more Yoga studios then Pizza delivery services!

It always gives some joyful thrill to go to an unknown place and  then see some familiar person.  Just at the entrance I saw two known faces and one after another, after 15 minutes I thought, “My God, when was the last time to hug so many Osho people in one day?”  If around 70 people were gathered for an evening Satsang, approx. 20 Herr (Mr.) Swamis and 50 must be  frau (Ms.) Mas!

In my observation, 70 Germans are more than 700 Indians in term of presence.

When I looked around me a man at 54 was the youngest man in the gathering.
Among the women, must be two or three in their forties,  rest in my age group or generation before.

Before the Satsang, Taruno again expressed her surprise how the news of Osho celebration has created resonance in so many people. One Ma in her late sixties starting communication with me with the sentence, “You were not in the commune? Must have taken sannyas afterwards?”

It was clear, from the commune, she meant Pune One and Rajneeshpuram. I told her that I was in Pune most of the years once Osho came back. I enquired, “Are you living in Freiburg? I have not seen you before?”She lives 170 kms. away and had come just for this evening.

This incident shows how much longing is in the heart of sannyasins to meet and greet each other. Though only an Indian, I was simply feeling part of the family gathering.

Somehow it is a macabre feeling to imagine, once Sannyas was a movement of young blood and now there is no generation next. So my observation is to the point, “As far as West is concerned, was Neo-Sannyas a one generation affair?”

One thing which I can say after four days, all the people who came had some serenity around them. Their presence felt like, ‘Life well lived in the pursuit of something higher and divine.’

This is what India has shared with the world through Osho….