I was lucky enough to be around at the beginning of this lecture series in Poona one, (1979) , when Osho was unable to give lecture -  it was never fully clear why..   Whether intended or not, I found this an excellent preparation for the times when Osho would no longer be around in person.  It was also a terrific reminder to many who were addicted to his physical presence, that this could be an error.  (I myself had friends who basically did very little else (at that time) but be in Poona, and simply go to Osho’s lectures every day, and where possible darshan in the evenings, and do very little else except eat!)

An empty chair was placed on the podium, and we sat in silence for those ten days, in a satsang type atmosphere that included some interludes of music.

I later learned that the “Empty Chair” was a symbol in both Greek and Hindu spiritual practice and thought.

To me at the time it was novel, and it felt just right as a teaching device. 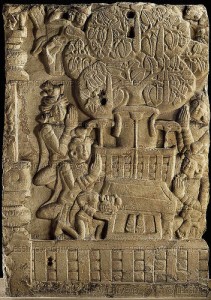 When Osho himself in person returned to the podium he answered a question about this, which is partly below:

Subhuti’s Question:
AN EMPTY CHAIR
A SILENT HALL
AN INTRODUCTION TO BUDDHA -
HOW ELOQUENT!
HOW RARE!

Yes, Subhuti, that’s the only way to introduce the Buddha to you. Silence is the only language he can be expressed in. Words are too profane, too inadequate, too limited.

Only an empty space…utterly silent…can represent the being of a Buddha.

There is a temple in Japan, absolutely empty, not even a statue of the Buddha in the temple, and it is known as a temple dedicated to Buddha. When visitors come and they ask, “Where is the Buddha? The temple is dedicated to him…” the priest laughs and he says, “This empty space, this silence – this is Buddha!”

This chair is empty, and this man talking to you is empty. It is an empty space pouring itself into you. There is nobody within, just a silence.

And Buddha is meditation – that is his flavor. These ten days we remained silent, we remained in meditation. The real thing has been said. Those who have not heard the real thing, now for them I will be speaking.

Hence my insistence that music and meditation should go together. That adds a new dimension – to both. Both are enriched by it.

I started these Buddha lectures with a ten-day silence deliberately. It was a device to start with silence – Buddha would have been very happy. He must have shrugged his shoulders a little bit because of the music, but what can I do? It can’t be helped.

This entry was posted in Discussion, Osho. Bookmark the permalink.

43 Responses to The Empty Chair