Posted on 6 October, 2017 by sannyasnews

Some Punters have asked us about this picture. It shows Mark Zuckerberg, (founder of Facebook) and Amrito at the Pune Resort, about ten years ago. We think Zuckerberg only visited the Resort once. 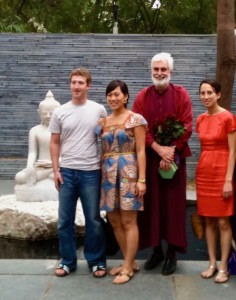 Amrito used to be called Devaraj. He has at least two straight names, John Andrews, and George Meredith. (This latter was the name of quite a famous Victorian English novelist (though virtually unknown now). Some punters wanted to know this information.

27 Responses to Zuckerberg and Amrito