Eight walk in silent tribute along the clifftops 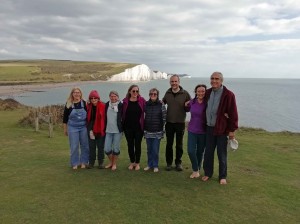 Sudipa describes how eight friends of Sannyas News co-founder Parmartha, who died on July 20, went on one of his favourite walks in his memory.

Parmartha used to organise and lead silent walks on the South Downs and in the Chilterns. I loved these walks, and so I felt it would be a fitting way to show my gratitude, and to honour him, to organise a silent walk in his memory. It was a case of third time lucky when we finally set off on September 30 because we had to cancel twice – once because the trains were not running properly, and once because there was a storm.

Eight people came, four from London (Navajat, Katie, Pankaja, and myself) and four from Brighton and Newhaven (Ruth, Garry, Nuro and Prabha). The London contingent took the same 9.46 train from Victoria to Ore that Parmartha used to take and we met the others on the seafront at Seaford .

The weather was fine and sunny. We walked along the seafront and began the silence as we started up the cliff at the east end of Seaford beach, just as with Parmartha we used to start the silence once we had left the urban environment. We walked along the path at the top of the cliff with the sea on one side and a beautiful view of the Seven Sisters ahead. Just before we reached Cuckmere Haven beach, we stopped at the top of the cliff, and sat silently for 10 minutes remembering Parmartha and others we have loved and lost. Then we ended the silence and had our picnic, again following the pattern of Parmartha’s walks.

After that, we walked up beside Cuckmere Haven, crossed the bridge over the river and went to the cafe at Exceat, which we used to frequent with Parmartha, for tea and cakes.

Still full of energy, most of us who had time walked back the same way to catch the train back to London, or to drive back to Newhaven and Brighton, Of course, this was a short walk compared to the whole day walks we did with Parmartha. We are older now! Parmartha’s walks often ended by walking this same route after leaving the cafe. Katie took some great photos, with help from passers-by, four of which are here.

I hope to organise some more silent walks in the Spring. Contact me by email on sudipa@zen.co.uk if you want me to let you know about them, and I’ll put you on the list.

33 Responses to Eight walk in silent tribute along the clifftops