Parmartha… a man of many loves and hats 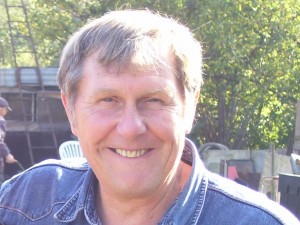 Around 150 people celebrated of the life of Sannyas News co-founder Parmartha, also known as Clive Critchley, at a lovely funeral ceremony conducted by Maneesha James on August 15. Among the many tributes was one from his old friend Kim Wells. This is a slightly extended version:

Parmartha  and I were friends for fifty years. A long time but it went so quickly. We were young once… ever so young. We had energy to waste – entrenched in youth –  and then suddenly, inexplicably, we were old. Dangerously old.And now, sadly, Parmartha, once so full of life, is alive no longer. He had a very full life, a generous, giving, creative life. In some ways he was larger than life. He ploughed his own furrow; solid, grounded; self-sufficient, self-possessed and self-assured.

Parmartha had many talents, wore many hats, mostly metaphorical.  He was an accomplished pianist and sportsman, lifeguard… winner of the Young Socialist debating contest in  SW England when he was complimented  by his local MP, Tony Benn…  a certified philosopher (student of Karl Popper), liberal studies lecturer, social worker, gardener… a cleaner for the cantankerous Spike Milligan, who was not impressed by his very basic domestic skills and sacked him in the first hour… a spiritual seeker, meditation leader, magazine and website editor, shop steward, horticultural therapist, house parent, theatre director, actor, disco manager and prodigious networker.

What didn’t he do?

But I shall remember him best for his capacity for fun,  adventure and theatricality, and his playful sense of mischief.

You wouldn’t think of Parmartha as a ballet dancer. As a gifted footballer yes, a fierce tackler, a good header, maybe a dainty dribbler, but not as a danseur …  a danseur of the pas de deux or even, in the chorus, of the pas de beaucoup.

But in 1970, he persuaded me to join an evening class in contemporary dance, a modern form of ballet.
In those less liberated days, we were the only members representing the male gender.

What I used to dread – and  what he didn’t seem to mind – was when the macho car-mechanics class came out early to leer at all the lithe, leotarded, young female dancers, and jeer, yes jeer, at Parmartha and myself, pirouetting precariously, flouncing, floundering and flailing about, falling over our  feet.

Of course, we weren’t there solely because of our artistic pretensions. There was an ulterior  motive. But unfortunately our romantic overtures towards our fellow dancers  were not so much rebuffed as ignored. We later found out, they thought we were gay…. and, not only that, romantically entwined.
Parmartha was a Queen… Scout. In case there is any misunderstanding here, I should point out that this is a prestigious scouting award, which Parmartha gained when he was 18.

As an extension of his bent in this direction, he introduced me and many others to the joys of exploring the countryside.

Barbed wire fences, bogs, brambles, “keep out, private” signs, were no barrier to this intrepid rambler.
We would punctuate our walks with stops in idyllic, country pubs, some of which wouldn’t serve us.
We often went off piste, sorry off pi…ste (pee..ste).

And if we got lost, it was the map….the map that was wrong.

Parmartha’s first law of hill walking: always keep your height. Not easy … especially on hills. I’m surprised we ever got home. No, to be fair, Parmartha was a good map reader.

As a Queen Scout, I don’t know what Baden Powell would have made of him in those days. He probably  wouldn’t have given him too many brownie points ….. or forgiven his trespasses, at least not those in the grounds of his friends’ stately homes.

Parmartha  did continue to embody one principle of the Scouts throughout his life: that a scout smiles and whistles under all difficulties.

Once in Ireland after walking for five hours in heavy rain trying to hitch a lift, he turned to me and said: ”This is the life!“. I raised my eyes to the heavens and despaired. But soon after, we shared a moment of bliss when, in the middle of nowhere, we came across a cosy pub and had a cup of “Irish tea”. An “Irish tea” is a cup of tea with a whisky in it, a drink that Parmartha often asked for in Ireland and which the Irish had never heard of. (This request was normally greeted with a quizzical, indulgent look, as if to make allowance for his being English and thus a bit mad or simple. Though one female publican treated it as an act of sacrilege, exclaiming: “ Look, I’ll give you a cup of tea and a glass of whisky – and I won’t look to see what you do with them!”)

Of course, Parmartha was right. This – all this – was the life, is the life!

Parmartha could take the rough with the smooth.

It was this boy scout stoicism that enabled him to bear his final suffering with such fortitude, dignity and grace. He said in his final days that he’d had a complete life, didn’t fear death and that meditation, his spiritual path, had helped tremendously.

Thank you Parmartha, for being so much part of my life, for all the fun, adventure and laughter you inspired in me and the friends we shared.

Thank you for all your patient understanding, particularly all that mental first aid you gave me when I was bogged down in a string of strung out, stricken, strangulated relationships… yes, thank you for all the vicarious suffering … that you experienced on my behalf!

And thank you for all the love, joy and support you gave me, my daughter, Jo, and so many others.

14 Responses to Parmartha… a man of many loves and hats