Osho, My Friend by S.K. Sakena

Posted on 9 January, 2017 by sannyasnews

THE WORLD may remember him as Osho, the enlightened, but for everyone in our family he was affectionately known as just Rajneesh. He was my father’s favourite student at Saugar University. Like with all teachers of yore, students used to collect at our home in the evening and debate matters philosophical. They talked of Gurdjieff, Nietzsche, existentialism, etc. My mother, as the Gurumaa used to indulge them with cups of tea and unending supply of pakoras. Rajneesh stood out by far as the brightest among the lot. When others would leave, he would retire to an empty room at the rear of our house and meditate for hours. My grandmother, who was the pooja-paath type, used to wonder what this chap used to do all by himself, for hours in that empty room. Much later, in his lectures and books Rajneesh has quoted my father with affection, as ‘my teacher’. Often he has criticized his ideas, too. Such was the ambience in which the quest for free enquiry was nurtured.

One summer, my father suggested that Rajneesh and I visit the temples of Khajuraho. Neither of us had heard of these temples and they were definitely not on the tourist map then. We hitch-hiked in a police van, and reached a Gandhi Ashram, in rustic Chattisgarh. Then we hit the dirt track and finally arrived at a circuit house in Khajuraho village. In the morning we made enquiries from the villagers and took one forest trail after another to reach these mind blowing temples. None of us had known what to expect. For the first time I wondered what the English explorers, with their Victorian values must have felt, when they chanced upon something so exotic (or erotic!). 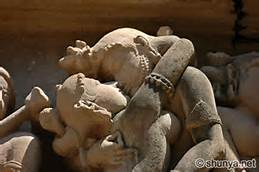 Rajneesh and I marveled at the most sublime tribute to love and female form, which the Chandela kings had left behind for us. Was this an ode to the sublime yearning of the soul to merge with the divine? Or was it just hedonism and a public celebration of debauchery? What amazed us most was that, the village women went about their routine rituals and parikrama of these erotic temples in the most matter of fact manner, totally unabashed! As I clicked, Raj kept on saying, “I must see your pictures.” When the enlargements came, like an enthusiastic child he analyzed each picture. He particularly commented on the sublime expressions on the faces of entwined lovers.  I suspect, that the seeds of his book, ‘From Sex to Super consciousness’ were sown at this time.

Shortly thereafter my parents moved to Delhi. One day Rajneesh arrived at our home in Delhi, accompanied by two beautiful women. He touched my father’s feet and dedicated his first book to him. Thereafter, he was a very frequent visitor and was always accompanied by a beautiful girl or two. My father used to tease him, and ask him what his secret of attracting beautiful girls was. But my mother never approved of his coming home with his companions. Faster than we could realize, his lectures started becoming more and more popular and he finally made it to Chowpatty, for his discourses. He graduated quickly from ‘Acharya Rajneesh’ to ‘Bhagwan Rajneesh’. He attracted hippies, flower children and intellectuals – all those who had recoiled with disgust from crass materialism and the horrors of  the Vietnam war. Zen was the flavour of the decade and he became its star exponent.
Later in his life 21 countries of the world would not allow him to settle, until he came accepted to Nepal.(circa 1986).  .

It was here  when chance brought us together after 28 years. My wife and I were checking into the hotel Oberoi Soaltee, when we noticed that the lobby was full of people in orange robes, each dangling a pendant, with a photo of Bhagwan. Enquiries confirmed that, yes Bhagwan was very much in the hotel, observing silence. Many floors in the hotel had been taken up by his entourage. Each floor was well guarded. Every evening, the lawns of the hotel were overflowing with folk from the valley, who would wait for Bhagwan to give darshan. Then they would go away, when told that he was still in silence. The very thought, that I should attempt to meet him, did not cross my mind. However, my wife kept on insisting, that I was one person to whom he would not say ‘No’. Very reluctantly, I tried to find out his room number. The hotel staff had been ordered not to reveal his whereabouts. However, with some manipulation I managed to meet his very suspicious secretary, who kept on saying “No, No”, even before I had said anything. Finally, I gave him my card and said, “I do not want to meet Rajneesh. Just give him this visiting card of mine. That’s all!”
Then things moved so fast. Like electricity, the word went around that Bhagwan was indeed going to emerge from his silence and give a discourse, in the Banquet Hall in the evening. We bought our tickets and purposely sat in the last row, so as not to be noticed. Besides, I was not sure, whether he would recognize me after 28 years. Suddenly there was hushed silence. The robed disciples formed a corridor and he appeared with folded hands. A benign figure with a hypnotic smile and in a diamond studded designer robe. His cap had two rows of diamonds and his slippers too! He settled down in an executive chair and started by saying, “We are so lucky today!” Then pointing towards me, he continued “Today my Guru’s son is here with us.” All heads turned towards the last row, but still no one could make out, who was being referred to. Then he started his discourse. My mind was too much in a daze to concentrate on what he was preaching. The discourse over, the disciples again formed a corridor. Much to everyone’s surprise, he headed straight for me and caught hold of my hands and looked lovingly into my eyes. Minutes passed and no word was exchanged between us. We just looked at each other and in silence spoke so much. His hands were so soft and I did manage to notice his diamond studded watch. After what appeared like eternity, he folded his hands in Namaste and walked on. Bhagwan had disappeared into silence again.

But that was not the end of the evening. Hell broke loose. His disciples crowded around me. Each wanted to hug me and had tears in their eyes, exclaiming, “Oh, Bhagwan knows you!’. ‘Oh, Bhagwan touched you!’ It was getting more than I could handle. The melee felt like a riot of Elvis Presley fans. I would have lost my shirt and it would have been torn to shreds, by souvenir seekers.  My wife and I made a quick exit. This was my last encounter with the man I knew as Rajneesh and Bhagwan.

41 Responses to Osho, My Friend by S.K. Sakena